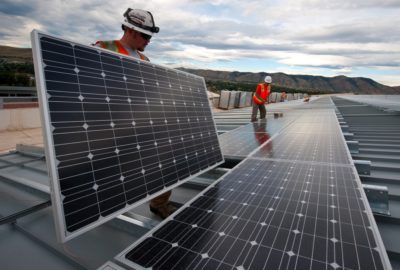 The Launch of the Power Sector Carbon Index

The way electricity is generated in the United States is changing

As the way we generate electricity changes, so do the associated greenhouse gas emissions. Thanks to low natural gas prices, 2016 was the first year that more electricity was generated from natural gas than from coal. At the same time, continued decreases in costs and sustained incentive policies for wind and solar power have accelerated the growth of renewable electricity. In 2016, the new combined capacity added of wind and solar was larger than the new capacity for natural gas. All of these changes directly affect how much carbon dioxide (CO2) is emitted by each megawatt-hour (MWh) of electricity generated. Deep emissions reductions are needed in the electricity sector to limit the impacts of climate change. To track the progress of reducing the emissions intensity of electricity, our interdisciplinary research team at Carnegie Mellon University’s Scott Institute for Energy Innovation launched the Power Sector Carbon Index. The index reports an accessible metric—the carbon intensity of U.S. electricity generation. We rely on publicly available data to create an easily understood, analytically transparent, and timely summary of the current trends in U.S. power sector CO2 emissions intensity and electricity generation. The Power Sector Carbon Index lets us know how far we’ve come, how we’re doing now, and how far we still have to go.

Why is an index needed right now?

While the Power Sector Carbon Index uses publicly available data that can be obtained by anyone, up until now we lacked a standardized way to calculate the carbon intensity of the U.S. electricity system. Furthermore, organizing those datasets, identifying missing or incorrect values, and compiling the information was cumbersome and time consuming. With the Power Sector Carbon Index, we've removed this barrier and mad these data accessible for all. Policy makers, industry, academia, non-governmental organizations, think tanks, and the public can rely on the index to quickly understand up-to-date trends in carbon intensity of the U.S. electric power sector, and get insight into the underlying drivers of these trends every three months.

How is the index calculated?

The index is calculated by dividing the direct emissions generated from all electricity generation sources in the U.S. electricity sector in a given time period by the total net electricity generation in that time period. The index is calculated for yearly, quarterly and monthly time periods, and values are given in pounds (lb) of CO2 per MWh, representing the CO2 emissions intensity of electricity in a specific time period. Since 2005 is often used as a benchmark year for measuring progress made in reducing emissions, the index also provides the percentage change between the current value and the annual value in 2005. For more details please see our report on “Power Sector Carbon Index: Data, Sources, and Methods" which details the sources, data, and methods for calculating the index. One of the features we always want when we visit an energy website is the ability to download the charts and the data, so our team built that capability into the Power Sector Carbon Index. We also have put our analysis code on GitHub, to enable energy analysts everywhere to build off of our work.

What are the key findings?